Staying alive on a bicycle is not easy.

I have had it with car drivers driving through the stop light and and almost killing me. So I got several strobe lights for my bicycle. But they are not easy to hook up. The white front light has only three bulbs. But the rear has six 3 watt bulbs and the side amber lights have four each. And they are all voltage regulated.

I realize most people are just not that mentally resourceful enough to build these onto their bicycle. They would need to buy boxes and battery holders and some electronics in the battery box. And then it would require a charger, although that could be built in to the box. Too bad it is so complex. If no one wants them it is because they have not been hit by a car yet. I have.

If people were smart enough they could build their own light system, but most are not. Well that's why people are willing to buy cheap bicycle tail lights that claim to be bright enough; for night use only. But I need to be noticed in the the DAY LIGHT!

If you have an electric bicycle, you can tap into the big battery and use an adjustable voltage regulator to run the lights, if you can find one that will handle the voltage of the bike's battery. So much easier than building another battery pack just for the lights.


You can get 18650 batteries with protection circuits but they are crappy. I ordered an adjustable “over discharge cut off protection circuit” [to cut off at 3 volts per-cell=12v] to install in my battery box. But will still need to use my I-max B6 smart charger. So you could get an I-Max B6 charger.


If you want something really bright, you need to use truck tail lights! Amber on the sides, red on the rear. Or the cops will fine you.

At 40 mph a car will travel 1760ft in 30 seconds! On dark days drivers need to see you at least that far in advance because they are half asleep from darkness, cold, and fog.

Small tail lights are not visible at that distance, except at night. And even then it is hard to judge the distance to you.

Just look at truck tail lights (with the brake light on) when they are 2000 feet ahead of you. The other way to be seen on dark day is to wear a 'day-glow' shirt.

These tail lights work on less than less than one amp. So you can use almost most any strobe flasher with these 56 L.E.D. tail lights. The new ones use less power. But the voltage input is only 9~14.8 VDC so I used three 3.7v 18650 Lithium-ion Cobalt cells in series with no problem. A better chemistry would be four LiFePO4 cells in series.
http://www.superbrightleds.com/moreinfo/truck-oval-lamps/pt-series-oval-stoptailturn-led-truck-lamp/557/

The four 18650 cells in series battery pack will be 16.8 volts maximum and about 4 to 5 Ah because it is made of old computer batteries. But never charging the pack to more than 16volts, then using a voltage balancing device [like the I-Max B6 charger] will keep it reasonably safe.

But the voltage sent to the tail-light still needs a voltage regulator, but not for the side strobe lights. Or you can use a 3 in series 18650 cell pack for less voltage of 14.4v maximum for the tail lights.


This project is so complex that some one should sell a 'strobe light wiring systems' already made. But you would still need to install it.

How to Build a Battery for Bike Lights 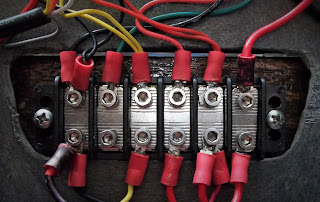 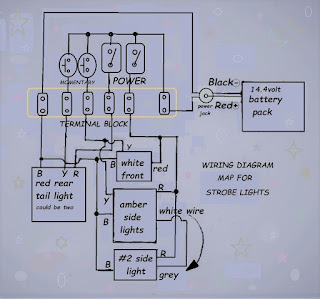 For head lights go here:
http://commutercycling.blogspot.com/2009/03/lighting.html
Posted by Prodromal at 11:44 AM