Field oriented control is a better way to make motors produce more thrust at lower and higher speeds than using gears. With controllers having more computing power now, they can control a motor much better than ever before. It requires a three-phase AC motor and a more expensive controller. These would be very good for a motorcycle that needs a wider range of torque-thrust than a simple electric bicycle.
“field oriented control of permanent magnet motors” on youtube.

By increasing the number of phases it is also possible to increase the torque per RMS ampere for the same volume machine. It is assumed that iron saturation can be neglected and that only fundamental air gap flux is taken into account.


It has a rugged simple structure, low manufacturing cost, high torque per unit volume, and the absence of rotor windings resulting in simple control schemes and decreased losses. Therefore, this kind of motor is an attractive candidate for numerous e-bike and electric car applications. 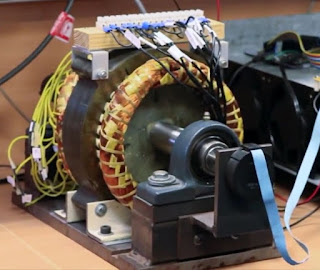 
The idea of the Asymmetric motor is to balance two Inductors so that as they function in parallel so that the “Back” electromotive forces will cancel them self's out.
The other idea is that a magnet as the driving force for magnetic flux,would work better than brute force originated by copper coils.

This type of motor has zero coasting resistance, even less than a geared hub motor. If you run out of energy, you can use it like a regular bike plus the extra weight, like walking a heavy cargo bike.
Due to missing magnets you can overheat it more than a synchronous motor.
The only limit is the isolation of the wires, this is usually like 200 degrees Celsius vs around 100 degrees for magnets, after which the magnets become useless pieces of metal.

The biggest problem with small motors is they need to spin fast in order to develop power and efficiency. A wide axial-flux motor would be a much slower motor because the edge of a wide motor is moving faster than the center. You would need to make it larger than the crank arm's circle. But it may work better if the diameter of the motor is close to the size of a wheel. Making a very large diameter hub motor may be easier than a crank motor.

An axial flux motor is different from conventional electric motors due to the different path of the magnetic flux. In conventional motors the flux flows radially through the air gap between the rotor and the stator.


A high pole count axial-flux motor would not need an iron core. Using nothing but copper and made extremely thin, would be very highly efficient because there is no hysteresis. And no cogging effect.

Basically you are attempting to create a CSIRO / Launchpoint like motor, but with even higher pole counts. (60+ poles?) The higher pole counts allows for lower rpm operation which is necessary for human pedaling cadence. A Halbach Magnet configuration focuses the magnetic forces within the motor and removes the need for iron.

How does an Induction Motor work