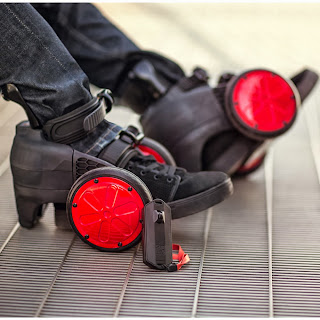 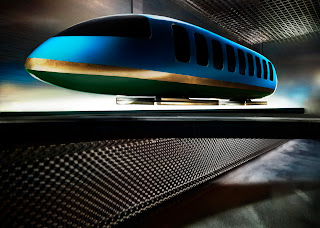 The auto industry is giving us the same lies that they did in the fifties and sixties about the future of cars, but now they promise pollution free machines, hydrogen-electric computer controlled cars. They even tell us that they can put more cars on the freeway; bumper to bumper at racing speeds. Some want to fill the sky with flying cars, as if fuel could get cheaper. That sounds insane to me.


MASS TRANSIT. Railcars floating on huge magnets....but can they be built in time? Are there problems with magnetism? Will the corporate overlords allow it?

PRICE OF FUEL. I can't stand to hear people whine about the price of gasoline when they should be raving about the 'true' cost of motor vehicles. According to the Dept. of Labor's Bureau of Labor Statistics, car ownership costs are the second largest household expense in the U.S. In fact, the average household spends almost as much on their cars as they do on food and health care combined for their entire family. If your annual cost of owning a motor vehicle is close to $6400 (as is the American average) you are still paying only a small fraction of the real cost (cars.com). The war for the last of the worlds dwindling oil supplies has cost us $200 billion and is still going up. That’s over $600 million per motor vehicle in America alone (mind blowing at any degree of error). If the 50 thousand American casualties (43 thousand fatalities, not including the lung cancer victims of exhaust poisons) caused annually by cars were caused by war, American wars would become much too unpopular to wage. http://www.iraqbodycount.org/

There are 204 million motor vehicles (140m cars) in the U.S.A. 600 million worldwide, using 40 million gallons of gasoline a day producing Carbon dioxide emissions of about 7 billion metric tons annually and shooting up because of the governments misinformation campaign about global warming. The world population is approximately 6.5 billion now, but an extra three billion people are expected by mid-century requiring three times as much energy. Obviously the world needs voluntary population control, but that’s even less likely to happen than cheap energy.

Hydrogen fuel is a fantasy made up by the halfwits in the white house to give us false hope in the present administration. Hydrogen takes more energy to separate from oxygen than is produced from burning it, so it will never be good as a fuel.

The only way to make enough electricity is to build thousands of nuclear power plants, and there is not enough uranium on planet earth to fuel them. Solar vehicles are a dream, and as with any high tech solution it takes almost as much energy to produce the equipment as is returned over its life span.


Brazil is going to be the first to convert to ethanol (from sugar cane) but ethanol can only serve to deplete the soil, like strip mining. Bio-diesel from algae is the best bet for keeping industry moving, but it’s not going to be cheap, and it will take way too much water.


To replace Americas $150 billion a year foreign oil addiction would cost over $300 billion to build enough algae farms. And every one will need new diesel electric hybrid cars; don’t think that biodiesel will cure the air pollution problem.

As long as petroleum prices are kept artificially low (gas tax revolts, subsidized acquisition of oil by war, denial of global warming), the postindustrial world will continue it’s happy addiction! Eventually we will all have to pay the price for not changing our “way of life” when it was easy!!!

Don't worry, humans will never get rid of cars, there will always be the rich that do anything they want. In fact I predict that the amount of cars will only increase, until hell freezes over. And I do not mean Hell Texas! 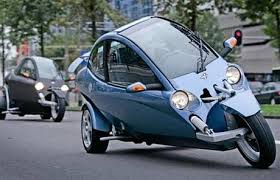 However I do think that some cars will evolve into leaning trikes with pedal electric hybrid motors. 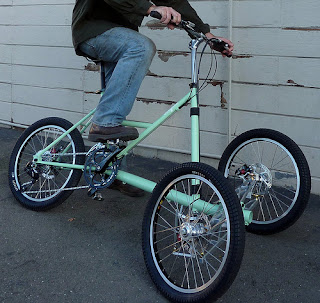 HPV's. Modern geared cycles are the most efficient transportation machine ever devised. In terms of energy input per mile nothing else comes close. I burn only about 400 to 800 calories to ride my trike 10 miles round trip. That’s equivalent to a large american breakfast.

Fueling your engine with concentrated carbohydrates (more than 10%) will sap your energy. I use diluted fruit juice with electrolytes (alacercorp.com). Stretching my legs during hard climbs and after hard workouts helps prevent muscle pain, but massage is better. Saving so much money by not owning a car I never worry about how much my cycle weighs and slows me down, because I know that the payload and my self will weigh much more. I make a point of carrying more weight than I need just to help build muscle that I need to over-come the limitations of human powered vehicles.

BIKES. There is a new trend in bikes to make them more comfy for short distance riders. They pushed the seat back and use sit up handlebars. They are not as expensive as recumbent bikes but not as comfortable. Regular bikes have not changed much sense they started using sprocket drives: better gears, different handlebars, all designed for racing. People are obsessed with speed; they pay way too much to get rid of a few ounces. That’s what fuels the bike industry. Unfortunately racing equipment is not strong enough to haul cargo. 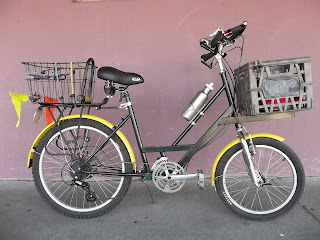 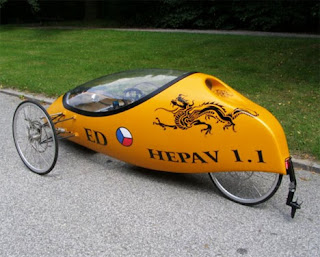 VELOMOBILES are mostly tricycles with aerodynamic bodys. In 1974 an American reached a track record of 43 mph on a recumbent bike in a velomobile wind fairing. 1986 the record speed for a human powered vehicle was 65mph. 2002 the official world record was 81 mph. A rider who is used to riding frequently can hold a speed of 30mph quite a long time in an aerodynamic velomobile.

For most people, the rain protection is certainly the main characteristic of a velomobile. When wet, the unfaired vehicle is no fun. Besides the rain protection, the cold wind is certainly as important. In wintertime at temperatures below 40 f, the choice of the right clothes is a risky game between sweating and freezing. In contrast, the temperature in velomobiles is controlled by air flaps and not by changing clothes. Admittedly, velomobiles are quite expensive at first. But those who decide to use their velomobiles for commuting can save a lot of money over a long period of time. 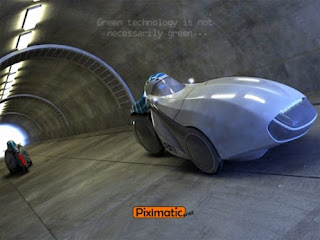 ERGONOMICS. Something else to consider is the difference in ergonomics between ‘bend-over’ and ‘layed back’ seating. The well-known bend-over-the-bars bikes (of whose design was frozen in time by a racing rules decree in 1934) designed for speed with disregard for comfort, requires gravity and your arms to pull you down onto the pedals. Recumbent lawn chair bikes help build muscle when pushing between the seat and the pedals. However due to the lack of movement of the hips to take advantage of the leverage of long cranks, you get better ergonomics (less knee pain) with short crank arms (130 to 150mm in place of the usual 165 to 175mm). But a lower gear is needed for hill climbing, 14% shorter cranks needs a 14%lower gear.


Ergonomic angle is what makes a bike fast!!! The more bent you are the harder you can push.

Transport for the Rich!
http://webecoist.momtastic.com/2010/08/26/the-future-of-personal-transportation/ 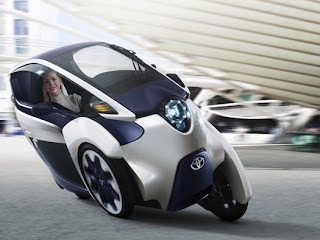 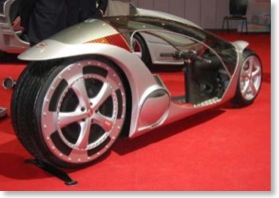