The Truth about clipless pedals, eliptical chainrings and every thing! 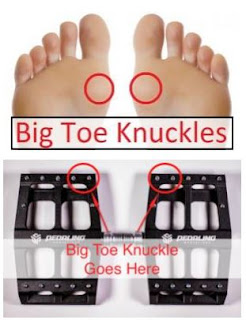 Don't place the ball of your foot on top of the pedal axle, look to place it in front of it. Make sure that your big toe knuckle is on the front inside pins.


As a lateral thinker and car free commuter, I am always looking for something to improve the interface between my aging legs and my drive wheels. People keep telling me that I should use cleats to pull up the pedals. But in reality most people can’t really pull hard enough to make much of a difference at high RPM’s

Ok they do work good for hill climbing with a lot of weight, but I need them mounted on the top of my foots arch not on the ball. Pushing the arch puts too much strain on the muscles and makes numb toes.

For most people the weight of the lifting leg is still about 20% of the push from the other side. It would be better to lift the recoil side foot off the pedal momentarily if you can keep your foot in the right place (easier to do with cleats).

They have an animation


Power Saver pedal pendulums reduce the lift by 40mm if set on 150mm crank arms but create more momentum at the end of the stroke to get through the dead zone. I think they would be even better if made to ratchet backwards so that you can lift the pedal to the fully extended position before pushing.

But nothing is perfect you still need to pull down and back (recumbent bikes), and you can’t ‘pull up’ while the other foot is pushing. In the early 80's shimano made them for long cranks.

There was a test done by one of the cycling magazines about 10 to 12 years ago. They rigged a number of bikes with load cells on the pedals to read pressure pulling and pushing. The riders were a mix of everything from average Joes to Cat. 5,4,3,2,and,1 racers, Iron-Man triathletes and pro-tour racers. Even though most of the riders felt like they pulled up a considerable amount the test showed that only a few of the very elite riders pulled up enough to make a measurable difference at maximum speed.

Why do people swear by the clipless pedals? Because they don't know how to pull back that last 10 degrees without them and it can't be done on a stand up bike anyhow. That's how the Rotor cranks work, it gets your rising foot threw just the last little bit. 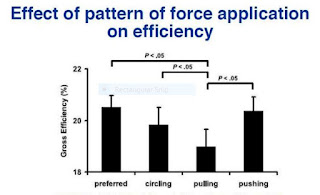 “Spinning” with BMX pedals is easy with a circular technique when the crank is out in front of you because gravity helps pull the foot down through the dead zone and back, on recumbent bikes. But knee damage is possible if you pull down too hard.

I use Speedplay frog clipless pedals on my trike because I am less likely to hurt my knees when pulling the last 10 degrees, if pulling straight back. But the best thing about cleats is the ability to get a much faster start crossing streets in traffic on my 70lb trike.

The only thing that makes the Q rings different from every other asymmetrical chain ring is the degree of adjust-ability and more aggressive recommended position to power threw the dead zone.

Biopace works at a slower speed (about 80rpm) because they rely on momentum and actually feel like I’m not pushing as far. 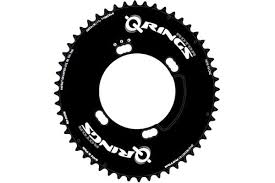 You shouldn’t waste your time with Q-rings until you have trained and developed a good technique. Power Cranks are the best training tool to ACTUALY LEARN TO "PULL UP"; Q rings may help with that last 10 degrees if you have a computer to prove it, but I did not feel any improvement when I tried them for several months. 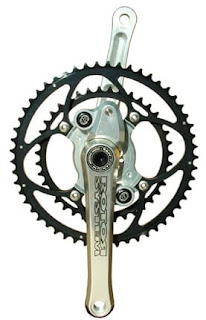 Rotor Cranks may be useless for “Lance-wanta-be’s” but I think they ‘may’ be the best thing for commuters with bad knees (other than just using lower gears and learning to slide your feet though the top and bottom of the stroke. ); even if it was invented over one hundred years ago. And the fact that it advances the foot only 10 degrees leaves me wishing for more.


Mechanical aids are a poor substitute for good spin technique. The only way to know for sure that you’re getting more energy to the drive wheel is to use load sensors on the pedals in conjunction with a Power Tap watt reading system compared with cadence and speed.
If you are a performance jockey you probably won't be able to maintain a fast RPM without cleats on a ubiquitous road bike, because you don't know how to use a lower gear.

I would like to see comparison data on the various devices, including short cranks and linear push power systems like the K-Drive that increases the push stroke.
Power cycling needs to be redefined, commuter performance is not about speed, it is about climbing hills with more weight and less pain!!

I improved my cadence by first lowering my gears until I had a light touch on the pedals on the worst hills. Then used shorter crank arms with an even lower gear; 150mm needs a 12% to 14% lower gear than the usual 170mm cranks I was using 17 gear-inches.

But what helped most with my speed was a steeper seat angle to use my abdomen muscles more for pushing harder.

CLIMBING HILLS WITH CARGO
The secret to climbing hills with too much weight is low gears and faster crank speeds. I can balance better with a more even cadence. Clipless pedals do help, but they can create knee damage from pulling to hard.

Also I think it’s better to just lift your "up swing" foot so the other foot doesn’t have to push it up.

Road bike shoes can be treacherous for walking on cement floors, too bad they don’t make special recumbent commuter shoes.

http://cycleseven.org/cycling-technique-pedaling-in-circles
Posted by Prodromal at 10:22 AM