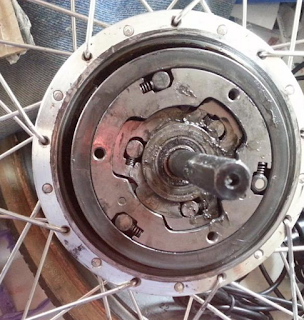 Most hub motors have a hard time climbing steep hills unless they are built like tanks. Big enough to ram more than enough amps through them and they will move up steep hills despite the lack of gears.


In the state of Washington 1000 watts is the legal limit of output for a motor on a bicycle; 1500 watts for a moped. Unfortunately it is harder to get a moped registered than a power assisted bicycle.


1000 watts will drive 400lbs up an 8% grade at about 12-13mph; possibly a little more if pedaling hard, but only if the gears are correct. That is too slow of a gear to drive around in all day if you want good mileage.


If you live in Canada you will probably need an additional gear reduction to the drive wheel at 500 watts, and it will be crawling up the steep hills of Vancouver.


I think the best way to motorize a cargo bike would be to use a Nuvinci infinite gear hub like the Elf car does. But use a two speed gear box to reach the desired gear reduction from the motor. Then directly to the brake side of the Nuvinci with a Gates GT3 belt; thereby using the Nuvinci to help your legs keep up with the motor. But this Xiongda hub motor looks like it has fabulous potential.


Mid-drives are popular, but for a cargo bike with 400-450lbs (total combined weight) they can destroy your drive chain fast, way too fast at 1000 watts! If you’re obsessed with a large motor like the Stoke Monkey you would be better off using it as a mid-mounted motor, driving the rear wheel through a stronger chain or belt. But don’t let me stop you from finding out the hard way; after all if you accelerate slowly and don’t stress the chain out much it may have reasonable life span.


Also be aware that these Chinese two speed hub motors are new and unproven for durability by power obsessed Americans. But keep in mind that the only bicycle power systems that are proven by time are old technology, and have problems that the sellers will never tell you about.


See this review on Endless Sphere forum.  The internal gears of the Xiongda may require better grease.


Some e-bikes have torque sensors that make the motor run intermittently, making a jerky motion. The Xiongda has an independent throttle that you can use at any time and a five-level PAS setting that you set in the LCD. You don't have to pedal to use the throttle.


Much more information on this article https://www.electricbike.com/2-speed-e-matic-xiongda/ 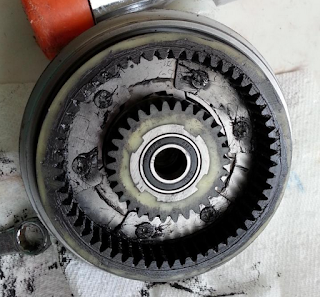