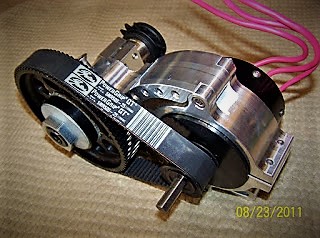 There needs to be a new motored bike classification.


The maximum power allowed for a motorized bicycle is 1500 watts at the drive axle. The motor will have to draw more than that.

1300watts will move 450lbs up a 9% grade at about 12 to 14mph if using the right gear. Unfortunately most people think they need as much speed as they can get. So if a moped bike had a gear box with at least two gears, there would not be a problem.

But if you want to use a fixed gear drive the 13mph is the maximum speed the vehicle would drive at. So the laws should reflect the amount of gear reduction your vehicle has; ie: for 20mph you need about 2200 watts to move that 600lbs up an 8% grade.

The wide torque band of electric motors, particularly the torque available at low RPM, eliminates the need for more than one gear.

Set the single fixed reduction gear at the highest speed that the available power will still be capable of driving your fully loaded vehicle up your steepest hill. Then if you still need a faster gear for less strenuous terrain, you can think about using a two speed gear box.

However it would be easier to just use a gear box, not to exceed 20 or 30mph. And have your vehicle examined for stop-ability with a total combined weight of 800lbs.

The real problem is people's insane lust for speed. They want to be able to turn their bicycles into illegal motorcycles. Well there are better ways to kill your self.

This means that your electric bike may need a speed sensor to turn off the motor if using a gear fast enough. ie: the human powered gears on the bike when using a Mid Drive kit, or just a Hub motor, or any motorized gear ratio, in conjunction with the motor's maximum RPM, that is enough to move the bike faster than 20mph on flat land.

“Electric-assisted vehicles capable of more than 20 mph under combined human and electric power may qualify as a "moped" if the maximum speed is no higher than 30 mph.”


And while your at it you may as well install a sensor on the crank arms to activate the motor to make sure they don't classifie your bike as a Moped.


Remember, electric motor power specifications are in terms of 'rated power' not the actual power you run it at. So a 500W MAC can easily be run at 1500W although it will heat up and eventually overheat with this overrated operation. But legally, it's still only a '500W' motor. Do not be confused by comments about testing the output of a motor - the traffic statutes are written to facilitate field enforcement - so many rated Watts - not the actual hp output of a motor which an officer could not possibly measure. He needs to be able to make a decision based on only a quick look at a motorcycle model plate or wattage sticker - hence the way the statutes are defined (of course there are some really confused state statutes out there, but that's another matter...)

Subverting the e-bike laws is easy. Most just use a motor that says 750 watts on it, but actually produces far more like up to 1500 watts. That will get you up even the worst hills if your gear is low enough. But don't tell anyone I told you how to speed over 20mph, the cops won't give you a break, they will confiscate your machine and fine you big time. So don't get caught speeding. Even the Elf pedal car uses this loop-hole, they claim that they are following the federal laws.