The Stites Trike Truck uses two of the highest priced hub motors available (v2 BMC).
If people had enough brains to use a pair of off-set mounted motors with large enough gear ratio reductions to bring the speed down to about 10 to 16mph at full throttle on flat land, this machine could climb steeper hills (9% grade) with less power! And keep the vehicle legal in most states. (Washington state)
A 3000 rpm motor would need at least a 13 to 1 reduction ratio, way more than any hub motor can do. But 7000 rpm motors are more efficient.
But at least they know how to put a really strong brake system on it! They should use motorcycle tires as well.
And 3 feet wide is the max for street use.
Weight stats: 275lb (bare trike) + 600lb (payload) + 150lb (driver) = 1,025 lbs. = 1/2 ton
Human Power input is significant at this scale only on flat land. But you gotta make look legal. 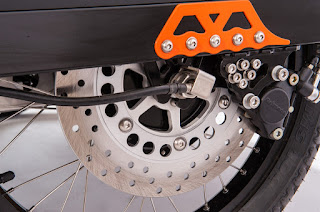 If you try using bicycle tires on a cycle-truck that can hold 800lbs the tire will probably blow out right away. What you need are two large 100mm wide tires made for 419lbs each. But it will also need larger than bicycle wheels.


People need to learn to slowdown!


A motorcycle truck limited to 20mph is what amerika needs. All it needs is a bicycle drive train and and fixed-gear drive to the rear wheels, with a jack axle to let the wheels move independently from each other when turning a corner. Build it as a power assisted bicycle limited by a 20mph gear, and put this large high voltage motor on after the thing is registered, so the cops won't see it.
https://www.electricbike.com/lightning-rods-mid-drive-kit/


The 'fixed-gear' would be set so the machine cannot drive faster than the prescribed speed-limit. Using electronic controls to limit the speed could be a liability if you were involved in a wreck.


Bicycle parts on the front end and light motorcycle wheels and brakes on the rear.

a large heavy vehicle like this could improved by using a two speed gear box.
http://commutercycling.blogspot.com/2015/09/two-speed-gear-box-for-electric-cargo.html


The only reason to use two geared hub motors on the drive wheels, would be to get more traction in the cornering. Like if you had to drive up a very steep, sharp switchback on a road winding up a mountain. This could be good for off road use also. The jack axle will allow the wheel on the outside of the turn to move faster with out traction, than the one on the inside. 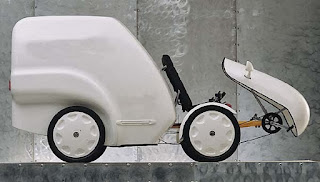 Thank you so much for this article! I am new to the biking community, and this post has given me much more consolidated insight than any other resource I've found.