Sellers of e-bikes, law makers and users should understand this,


(even if just to explain to the police).


The power on label is not what you get at the ground. The motor its self looses energy before the first stage reduction then each set of gears looses some. A 2800 watt motor will give you less power with a geared mid drive than with a direct drive, but not much. Power assisted bicycles should be regulated like mopeds; the power at the rear axle for a moped in Washington is limited to “2 brake horse power”. A bicycle maybe 1.5 brake hp , not that any one could tell by looking at it. So in Washington state they let us have 1kw (input) motor, Mopeds are regulated at the factory level.


The law should be changed to read “limited to the speed of 20mph” only! Big heavy motors can produce much more power than is on the label. And because it takes a lot of power to climb hills with cargo, Speed and brakes should be the only consideration.


If your vehicle is geared correctly to climb your worst hill, your equipment will last a lot longer. And you can use the controller to limit the amount of power output to keep the speed down to the legal limit.


Unfortunately calculating the gears for a particular motor is very difficult. For instance, a brushless motor would have its peak power at half of it's unloaded rpm, if there was no current limit set in the controller. The point where it can possibly reach its most power is between 50% and 90% of its no load rpm, depending on the controllers battery current limit. This point can be calculated, but it's not easy. There is a lot of motor data out there. You can calculate it using Peak Efficiency rpm, for example, or find it at ebikes.ca for hub-motors. Much easier to buy a kit, but be aware of how much power you need.


With only 250 watts in Asia or Europe you pretty much need a transmission to have a decent all around vehicle.

Gearing a motor to human speed 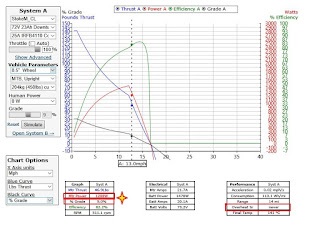 Even the Stoke Monkey spins because it is a hub motor hanging on it 's hardware. It needs to spin at about 500RPM for real hill climbing with cargo. So consider buying a mid drive kit with planetary gears so that the out put is a reasonable speed while keeping the motor at a high rpm. BSS02 or BSS03 or the cyclones kits.


The majority of the heat that can damage the motor and controller comes from the amps of current. By choosing a system that has higher volts, you can achieve the same amount of power with fewer amps.


Mid-drives can be done in several different ways.


The most torque is obtained from a two stage gear reduction before the crank-set, making it into a three stage reduction by the time the energy gets to the wheel. Loosing too much energy.


Or you can get better efficiency if you bypass the cranks, but that makes it impossible to climb hills without motor support. Even if there is increased efficiency and less wear.


If you want to drive the rear wheel directly, you may need a motor with more copper just to deal with the heat produced by slow speed high torque hill climbing.


The reason to use the bikes gears is the motor can stay up in the higher RPMs (allowing for a faster smaller motor). This prevents the motor from producing waste-heat in the first place, due to bogging down and running at low RPMs, like a hub motor might do (a direct-drive hub spins at the RPMs of the wheel, and geared hub motors have a poor heat-shedding path). Also motors with low pole-count allows can run at high RPMs without experiencing the waste-heat that is usually produced by eddy-currents.


Mid-drives are usually limited to about 1000-1200 Watts of power, since the derailleur gears can not last more power reliably. Mid-drive chains wear out quickly.

I like the idea of powering the rear wheel directly through a Nuvinci infinite hub gear. Or drive the wheel directly with one gear reduction and the pedaled chain drives the hub gear, like the Elf car does. Even if you should use a larger motor, with ability to run more amps at a slower rpm. You may need a larger bike for this extra weight, like a large cargo bike.

I think using a 5 or 6 speed cassette with the cogs spaced a wee bit further apart you could use the heavier power chain. But you may need to use an internal gear hub, because heavier duty chains are not going to shift with a derailleur. 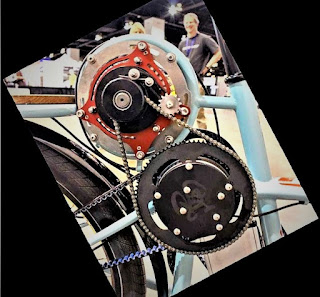 The picture is of a Metropolis two speed internal geared crank set, that sends only a small part of the torque through the pedaled crank at 60 rpm. Most of the torque is sent to the rear wheel by a Gates belt. Bicycle drive trains cannot take the full torque that a large motor will produce. Hard starts on a cargo bike is a very bad idea.

To drive the left side crank with a three speed Sturmy-Archer gear hub (as a geared mid-drive). Use a chain from motor to hub sprocket, and a chain or belt from a pulley mounted on the flange of the hub. 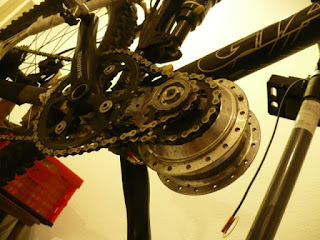 This is a geared hub motor converted to a mid-drive.

Two stage reduction before the crank-set.

When driving the cranks, so that they move at human speed with a 'gear-less' hub motor, it is less efficient than what you would get when using a fast motor with a two stage reduction, like a 'geared' hub motor, because motors were made to move fast, faster and even faster (depending on the voltage and the way they were made).

Think about how gears turn kinetic energy into torque. “But there is so much magnetic mass that it makes up for the lack of speed,” you may argue. So it would have a larger weight to efficiency ratio; the newer mid-drives have smaller lighter faster, more efficient motors.


The one thing I don't like about mid-drives is that they use up your drive chain faster than human power alone (100-150watts). That is one reason I would drive the wheel directly with a belt.

I like the idea of powering the rear wheel directly through a two gear hub. Even if you should use a larger motor, with ability to run more amps at a slower rpm.

Driving the rear wheel through a two or three speed hub would be a good way to have enough gears without driving your sprocket driven chain. There by saving a lot of maintenance money. 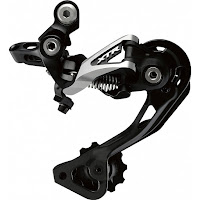 Good equipment with high precision like the Shadow Plus dérailleur are needed for high power mid-drive application: all my chain skip and chain slapping issues, are gone.


I have finally decided the best way to motorize a light weight vehicle is to mount a motor behind the seat tube and run the power to the drive wheel directly (unless you can find a variable speed gear box that does not use friction to shift the gears). However this is best done on a long-tail cargo bike or recumbent trike.


Mid-drives make it difficult to shift gears. And most will turn your bike into an illegal motor cycle (unless the controller has a speed sensor). They can drive your bicycle faster than 20mph even if you keep your feet on the pedals.


Using a high speed, high voltage motor, with enough gear reduction to turn the kinetic energy into enough torque thrust for your worst hill. It could make it possible to drive more weight up steeper hills than using a large heavy motor that is not geared. Also you can use a larger heavier duty drive chain, or Gates belt to the drive wheel, than mid-drives. Belts are quieter and last longer than chains.


And if your gear is set to the speed your motor can handle on your steepest hill, you will always be in the right gear to cross an intersection and climb a hill. But you may want to adjust your pedaling gears to take over from the motor as soon as you’re moving fast enough. 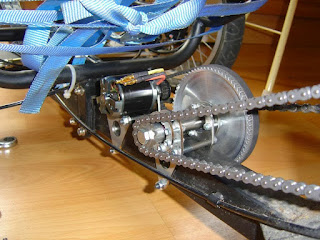 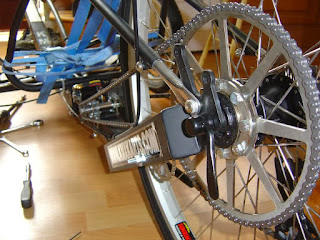 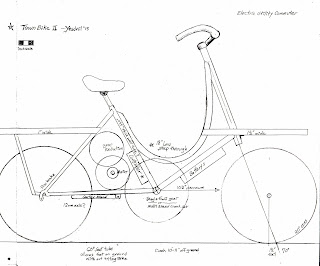 How to build a freewheeling crank set for mid-drive motors: