The heaviest thing I have hauled with my bike is bricks. But I was unable to carry many of them. I need a motor and more importantly, a very low center of gravity.

Most people do not know how hard it can be to live without a car. Only a few people have made any attempt to design a bike that can haul really heavy cargo. I assume that I will have to build it my self.

How to build a Super Cycle Truck

Most states have a limit to how much power can be used on a bicycle. 3500 watts is by far way too much for any kind of bicycle or moped. A motorcycle however can handle it.

What does it take to build a motor cycle? Brakes are the most important part. Double pad hydraulic disc brakes for bicycles would probably not be able to stop a 600lbs vehicle (total combined weight) at 60mph.  Motorcycle brakes would be needed, but that would require motorcycle wheels also. Those brakes can almost definitely work at 30mph; not sure about the rest of the wheel when braking, but BMX wheels can be built to handle the weight of 300lbs each very easily.

Laws need to be explicit about how a 3500 watt motor could be used on a moped. Low Gears need to be a prerequisite for all powerful motored bicycles; As well as the brakes.


Most people are such dummies that they think of gears as something that are used to go faster. But the best thing to use them for is hill climbing with massive amounts of weight. 3500 watts can propel a 600lb vehicle on flat land at over 60mph, but if you set a single fixed gear to about 30 mph the vehicle can climb an 8% grade with the 600lbs, and not be driven over the 30 mph speed limit for a moped on flat land. And if you wanted to haul more weight up a steeper hill you could use a gear box with a lower gear, not a faster gear. Direct drive hub motors use two or three times as much power to move the same amount of weight up the same hill, they don't even use them on motor cycles.

I think the problem is that there are a lot of cyclists that don’t use gears at all. Gearless direct drive hub motors are made for racing. They claim more efficiency, but the best a hub motor can do is 75%. While a high speed high voltage motor like the Lightning Rods kit is up to 90% efficient, even with a very large gear reduction.

Hub motors will not work on steep hills with that much weight. Even with the proper gears it takes about 1500 watts (moped's limit) to move about 800lbs up an 8% grade at 10mph (13mph for 600lbs). With a hub motor it would take roughly three times as much power, and moving that slowly the hub motor would over heat severely.

Ladders can be hung on the side. 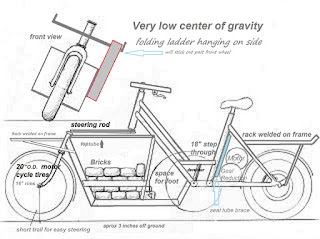 I designed this bike to be easy to build without a shop and all the nice tools usually found in such shops; because there will be a time soon that factory bikes will be too expensive for most people that need them. And don’t bother telling me that square tubes and flat bar are not stronger than round tubes! Most people don’t have a clue about engineering.

for  a heavy duty rear drop out click here

A two wheel trailer will not corner well with top heavy cargo. And if you are hauling a load heavier than your trailer is designed for. The trailer can make your bike vibrate side to side.

It becomes more challenging for people to fully control the bicycle as the cargo gets heavier. In the case of the cargo holder dragged or installed in the back, riders won't be able to pay attention to the cargo at all times.

When I was hauling a really heavy load down a not steep hill. My trailer started pushing the bike and the front end started vibrating side to side, out of control. I applied power to the pedals and it stopped.  Good thing it was not a steep hill.

A really heavy load on a trailer may need a brake or two riding down a steep hill or just too much speed, so that the trailer would not push the bicycle. But how would you attach one?

Cable brakes are certainly out as connecting them would be a nightmare and I seriously doubt that a cable that long would work effectively.  That means it's either gonna be electric or hydraulic and then you would have to come up with a fool proof way to connect them without injecting air into the hydraulic lines.

Pneumatic I would guess would be out since you would have no way to create air-pressure to replenish a tank. If you do succeed in adding them how do you apply them? A separate lever? That seems dicey.
a “surge brake system” would be the thing to use. 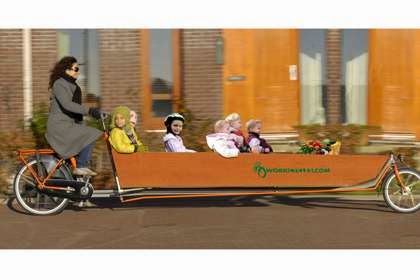 The kind of cargo bikes I want to build will be able to haul a load of bricks, and other building materials. The total combined weight of a such a vehicle could easily be 550lbs or more. I believe that I will have to use motorcycle tires just to make them last longer.

And if you really need a longer roving range on the level areas, you could use a second motor geared to a higher ratio. Possibly even as low a power as 745 watts. Europe has severe restrictions on the power used on non-licensed vehicle (one third HP). But in America one HP motors are usable for most states, and something like a 1000 watts in the state of Washington.

I believe that a larger than legal motor can be used if you use a good programmable controller. And it would last longer than using a barley large enough motor. 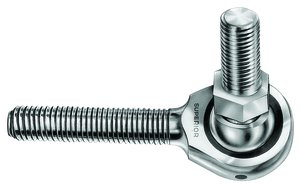 I had a question. Have you drawn these sketches? Because they are looking like a real blueprint of a cycle.

Yes I did it my self. It has taken me many years to be able to invent a bicycle. See others I had done on my blog.